Fifty years after his debut in 1966’s Fantastic Four #52, the Black Panther will headline his own live-action movie, as a key component of Marvel Studios’ Phase 3 slate. T’Challa is played by Chadwick Boseman (Jackie Robinson in 42), who makes his debut in Captain America: Civil War before moving on to his own film. The Black Panther solo movie is scheduled for February 16th, 2018, and it will be directed by Creed‘s Ryan Coogler.

Recently, a settlement was made between the Kirby estate and Marvel, which will allow for greater recognition of the man who helped create their empire. While there have been plenty of Black Panther stories through the decades, it’s the stories shaped by his co-creator, Jack Kirby, whose incredible ideas and visuals provide the most fodder for a big-budget movie.

It’s fashionable for superhero movies to take direct inspiration from specific comic stories at the moment (see: X-Men: Days of Future Past, Captain America: Civil War, et al), and it looks like more recent T’Challa adventures will serve as the film’s source material. But where else should the Black Panther movie turn for inspiration? We’ve got a few ideas. Let’s look at Jack Kirby’s Black Panther stories, shall we? The Black Panther movie will be made even greater the more Kirby it contains!

Jack Kirby used T’Challa in stories during both his runs of work for Marvel in the ’60s and ’70s. In the 1960s, in addition to his 1966 debut appearances in Fantastic Four #52 and #53, T’Challa appeared in the 1967 Fantastic Four Annual, and in a series of stories with Captain America in 1968. Kirby then told more T’Challa stories for twelve issues of his own comic from 1977 through 1978. It’s his introductory story and that Kirby written and drawn solo series that hold the most interest for potential movie fans, though…

Our first impression of this African chieftain, T’Challa, the Black Panther, is the amazing magnetic wave-riding ship he sends Reed Richards as an enticement to visit his kingdom, Wakanda. In addition to the ship, the technology that T’Challa’s messenger uses to communicate with Wakanda impressed Richards enough to take the trip in the first place. Well, an African holiday probably didn’t sound too bad either, especially after the exhausting Galactus trilogy and “This Man, this Monster” adventures that the Fantastic Four had endured in recent issues.

We suppose that for the purposes of the Marvel Cinematic Universe, Tony Stark could serve as the screen counterpart for Reed Richards in Black Panther’s introduction. All that’s really required is a scientific genius with an appetite for adventure in order to make the broad strokes of this work. All we need is a reason for the outside world to make contact with the technological paradise that is Wakanda.

As the team exits the ship in Wakanda, they realize that the foliage they saw from above was just a cover for a man-made technological jungle, and T’Challa is hunting them! Only through the actions of surprise guest Wyatt Wingfoot is T’Challa defeated. Nevertheless, the chieftain of Wakanda describes himself as possibly the “richest man in all the world,” and throws his guests a party.

The Black Panther’s inclusion in 1967’s Fantastic Four Annual didn’t really add much to his wonders. He’s a great, acrobatic fighter, and gets along well with other royals, the Inhumans. Maybe T’Challa will show up in 2018’s Inhumans movie, as well…

The Panther had plenty of adventures with Captain America in his early days, too, which makes his introduction in Captain America: Civil War an easy fit. In one memorable outing, Wakanda is attacked by Baron Zemo, T’Challa sends a magnetic wave rider to find Captain America. Zemo had created a satellite solar heat projector that’s more powerful than an “H-bomb.” After a bunch of trouble, and help from Sharon Carter and Nick Fury, Cap and the Panther defeat Zemo and destroy the satellite.

As with almost everything Kirby did for Marvel in the 1970s, he made his Black Panther series undisputedly his own. Gone was any trace of the socially relevant “Panther’s Rage” or “Panther vs. the Klan” stories that were delivered by Don McGregor, Rich Buckler, and others. Kirby’s Black Panther places T’Challa as an Indiana Jones-styled adventure character (three years before Jones’ cinematic debut), manipulated by a group of collectors to use “King Solomon’s Frog” to find the riches in Solomon’s tomb.

Marvel Studios has carefully cultivated a “high adventure” feel for many of these movies, and this might be exactly the kind of tone that would suit the big-screen Black Panther. It was in the pages of Jack Kirby’s Black Panther that T’Challa took on a samurai and a Yeti, not exactly guys you build a movie around, but definitely not your run-of-the-mill soldier villains, either. And speaking of villains…

Way back in that first Fantastic Four story, T’Challa described how Andy Serkis Klaw, came to Wakanda to take their precious Vibranium, a huge mound of fantastic metal, which forms the basis for Wakanda’s technology and wealth. Klaw wants to use the metal to make his creatures of sound physical. Vibranium also happens to be the metal that makes up Captain America’s shield, and as we saw in Avengers: Age of Ultron, it was a handy metal for Ultron to use.

Since Andy Serkis showed up as Klaw in Avengers: Age of Ultron, we imagine that means he’ll be back for the Black Panther’s first solo outing, although that hasn’t been confirmed at this time (Michael B. Jordan is instead the primary villain right now). And there are other characters from Kirby’s ‘70s run on the character that could be mined for this franchise (not even counting the times he took on a samurai or a Yeti), even if they only appear on screen as side menaces.

Here are a couple of other notable examples:

There was the vibranium-mutated Jakarra, who it took the combined might of T’Challa’s extended family (as “The Black Musketeers”) to defeat.

The Panther also took on the virtual vampire Kiber the Cruel, who sustains himself with other peoples’ life energy via his matter transmitter.

Don’t underestimate the Black Panther. His creative pedigree is as impressive as any other hero in Marvel’s stable, and that blend of hi-tech high adventure and jungle superheroics should give this one a different flavor.

Rand Hoppe is a media/graphic artist, cartoonist, and the director/curator/founding trustee of the Jack Kirby Museum.

This article first appeared in November of 2014. It has been lightly updated to reflect Captain America: Civil War. 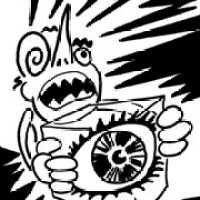 Captain America: Civil War and the Future of Marvel Phase 3

MST3K Turkey Day 2020: How to Watch the Marathon This Thanksgiving