Okay, Okay, I know what I said last time.  Yes, I love Kevin Costner.  And yet, there is a large, glaring gap in my Costner oevre.  So it’s time for me to come out and admit it:  I never saw “The Postman.”  I don’t know why.  There’s no explanation.  I mean I don’t particularly suffer from Apocalypse Fatigue.  Mostly I love a good Apocalypse movie.  Although I do find the very first Mad Max movie difficult to get through, even with super cute dog sidekick.  But Mel Gibson is no Kevin Costner, although I will give him snaps for coining the phrase “Sugar Tits.”  As in, “WHAT DO YOU THINK YOU’RE LOOKING AT, SUGAR TITS???”  (Fill in appropriate alcohol slurred, anti-Semitic comments.)  And “all things Mad Max” were well before I started boycotting cuckoopants Gibson for all the reasons encapsulated in the classic South Park episode, “Mel Gibson Is Crazy” (Season 8, Episode 4 in case, for some INEXPLICABLE reason you have not seen it).

But you know, now I’ve admitted it.  I never saw “The Postman,” until last night that is.  I moved into a house about six months ago that has cable.  It is the first time I’ve had cable in maybe twenty years.  Amazing.  As in just the existence of it I find amazing.  Then I was sitting at the bar in a Chinese restaurant early on a Sunday and the guy next to me explained what that big “OnDemand” button does on my remote control.  AMAZING.  OnDemand has either revolutionized my TV viewing, or allowed me to feed my OCD tendencies and do things like watch six straight hours of “Psych.”  “The Postman” cost me $2.99 on OnDemand.  The only thing I regret is that I didn’t get it in HD.  When I moved into fabulous cable house I purchased a plasma screen TV.  Amazing.  I mean it’s like you’re ON the sidelines for football games.  I would have enjoyed “The Postman” more in HD.

Because GUESS WHAT?  “The Postman” is a freaking Western.  Awesome.  Love it.  I have explained in detail my thoughts regarding Kevin Costner and westerns (i.e., SIGN ME UP!! – surefire success, etc. etc.).  Best scene in the movie:  Patton’s Army (as in Will Patton, who plays a former copier salesman who, when whatever it is happened, happened, seized his opportunity to reinvent himself as “General Bethlehem” leader of a mounted, marauding militia) is laying siege to a walled town whose inhabitants had briefly lost their minds with hope and denied his minions entry; Kevin Costner (he’s “The Postman” in case you were wondering) pulls himself into the saddle on a galloping horse and then rides hell for leather to the rescue of Abby, who he pulls up behind him with one arm.  The man has mad skills.

And speaking of Will Patton, he has played a lunatic opposite Kevin Costner in the past.  Who remembers that fantastic film?  Anyone?  Bueller??  “No Way Out.”  Remember??  Patton played the completely deranged guy who, I would say, was in love with Gene Hackman’s character, and then shoots himself in the head at the end.  (Sorry, I cannot be worried about spoiling a movie that was released in 1987 – get over it.)  Will Patton plays a pretty good whacko, although characters in “The Postman” are painted with a pretty broad brush and Gen. Bethlehem is no exception.  He’s crazy in a completely predictable way.  But a good bad guy nonetheless.  (His riding skills are not up to Costner’s though.)

Abby, our erstwhile heroine, if “The Postman” has such a thing, is a whole bunch of fun.  She is hardcore.  I feel like she might be able to whip the entire country back into working order singlehandedly if the men would just give her a shot.  Instead, she has to slap Costner (his character has no actual “name” – just “The Postman”) out of his semi-pathetic desire to stay on indefinite bedrest in a cabin in the woods by, among other things, shooting the horse for dinner.

I would go so far as to say that “The Postman” is “Waterworld” without the water, substituting horses for jet skis and Will Patton for Dennis Hopper.  And, if you remember, I LOVE “Waterworld” so I am not saying anything negative about “The Postman” by making that correlation.  In the same scene mentioned above, prior the full-on gun battle, there is an inexplicable moment when Gen. Bethlehem’s cavalry is riding around randomly in circles at high speed JUST LIKE the scene in “Waterworld” where Dennis Hopper’s jet ski minions are all milling about in the ocean.  I mean all they did was substitute horses for jet skis.  Good times.  Both movies are post-apocalyptic.  The year is 2013 in “The Postman” and, judging from what various characters say about not having heard from family members in fifteen years, the “apocalyptic event” occurred in 1998 (the film was originally released in 1997).  So I worked it almost perfectly.  I watched “The Postman” for the first time fifteen years after its initial release, just enough time for the entire country to have dissolved.

The apocalyptic event in “The Postman” is never actually identified, but there are enough references throughout the film to suggest that the screenwriters were covering all their bases; plagues; some farmer who was agitating for something or other; “The Battle of Georgetown” during which the White House was burned to the ground.  After all of which the United States of America ceased to exist, along with its central government and any kind of communication beyond word of mouth.  The action of the movie itself is set in Oregon and the movie centers around Kevin Costner’s character who is wandering through a ruined landscape with his companion Bill the Mule (yes, he’s a Mule – as in HEE HAW).  Think, “Wall E,” “I Am Legend” – cities intact except for their inhabitants.  Granted, this is more small town settings.  But it’s nothing you haven’t seen before.  I mean still pretty fascinating to just come upon businesses that are completely intact except for the people.  And during the beginning “Kevin and Bill the Mule” portion of the film Costner is pretty entertaining carrying on a one way conversation with his equine companion.

“The Postman” is based on a sci fi novel of the same name written by David Brin and published in 1985.  Frankly, I would describe the entire premise of “The Postman” as “quaint.”  The rest of the story and the movie are fun, fun, fun.  But the idea that something could happen any moment now that would return the United States (and presumably the rest of the World – since it does not appear that any foreign nation moved in to fill the leadership vacuum) to a pre-pre-Industrial Revolution era of communications technology is just silly folks.  I mean, REALLY??  BUT!  This is cinema.  Suspend your disbelief.  And I’m going to give David Brin the benefit of the doubt.  I mean he wrote this in 1985, it was a more innocent time.  I know, I was there.

So however we got here, here we are in a continental US where there are pockets of people living in towns, villages, what-have-you and no one has heard a thing from anyone or anything outside their own town or village (except for regular raids by Gen. Bethlehem) in fifteen years.  No one has any idea whether a central government has been re-formed, whether Europe still exists, etc.  After a fun bit where Gen. Bethlehem’s men demand that their nightly movie be “The Sound of Music” over and over again (“Is THIS what you want you BABIES???”) a cold, wet, hungry Costner, having escaped indenture with Bethlehem, happens upon a wrecked US Postal truck and takes the uniform off the skeletal remains of the driver.  The next day, wearing the Postal uniform and carrying a bag of mail Costner attempts to pass himself off as a Postman for the re-formed US government in order to get into the town of Pineview, OR.  Not only does he get in, he touches off an actual resurgence of the Pony Express with mainly teenagers swearing each other in as Postal Carriers and sewing uniforms and riding horses at high speed to deliver mail to newly reinvented mail routes.

What happens here is that the people, who are all Americans, rise up against Gen. Bethlehem and his ilk and are willing to give their lives to challenge tyranny and to recreate the connections and community in the United States.  And all they needed was someone to suggest to them how to do this.  “The Postman” has heightened relevance in the Post 9/11 era because it is offering an object lesson in what I believe is true about Americans now:  9/11 could not happen again because Americans will simply not sit by on a plane and allow it to happen.  In fact, after three planes on September 11th, Americans stopped sitting by and crashed United Airlines Flight 93 into a field in Shanksville, PA.  That sometimes hard to define “American Spirit” is what “The Postman” is about.

ALL of this is fun.  But none of this is, shall we say, “unique.”  And FOR THE LOVE OF GOD, someone MUST make the use of montage illegal in all films going forward.  Please make it STOP.  (“Team America: World Police” anyone?)  I won’t tell you how it ends.  But when is the last time you saw a Kevin Costner movie that did not have a “hopeful” ending?

This movie is a paean to the US Postal Service and the Pony Express and the freaking American Way.  And guess what?  I LOVE that shit. 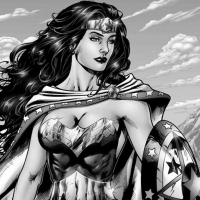 Looking back at Kevin Costner's The Postman

Why the world needs a few more Kevin Costners