Legendary rap group N.W.A. (an abbreviation of Niggaz Wit Attitudes, a name arguably more controversial now than it was nearly 30 years ago) gets the biopic treatment in the new film Straight Outta Compton. It’s a film that launches as a surprisingly raw and humorous portrait of the group’s three primary artists (Eazy-E, Dr. Dre, and Ice Cube) as they find their respective roles in creating the album that brought gangsta rap into the mainstream. But unfortunately, repetitive and unconvincing scenes depicting “politics of the business” causes the film to suffer under its two and a half hour-runtime of bloat, turning what could have been the Rocky of hip-hop movies into a mostly by-the-numbers hagiography.

Beginning in 1986 at the height of the crack epidemic in South Los Angeles, Compton opens with Eazy-E (played with convincing scrappy swag and nasally bravado by Jason Mitchell) surviving a militarized raid on a drug den. His escape over rooftops while the police’s “ghetto birds” hover overhead, establishing him as the only member of the group who actually lived the “gangsta” lifestyle.

Dr. Dre (Corey Hawkins) is introduced as a dreamer, continually lost in the music in his head, but also an ambitious businessman whose faith in his ability to create never wavers. The group’s primary writer, Ice Cube (O’Shea Jackson Jr., who looks and sounds uncannily like his father), fancies himself “a journalist” by reporting on the poverty, violence, and constant menace of police harassment that is the grim reality of his adolescence.

The group coalesces when Dre convinces Eazy to bankroll his musical production, built around Cube’s lyrics. In a series of funny scenes where the young men’s bonds of friendship are demonstrated by good-natured ball-busting, Eazy transitions from being the behind-the-scenes “Berry Gordy” of the group, to assuming the role as its frontman.

When N.W.A.’s first single hits big, Eazy is wooed by manager Jerry Heller (Paul Giamatti), who, for reasons that are never made clear, only signs a contract with Eazy, leaving the other members of the group in indefinite limbo, even as they grow into a national phenomenon, selling out arenas and making inroads with white audiences.

At one of these sellout performances, the group is warned by local law enforcement not to perform their seminal hit, “Fuck Tha Police,” under pain of arrest. The emotion behind the song, mischaracterized by critics in its time as a nihilistic anthem of criminality, is in fact driven by a sense of hopelessness that when you’re young, poor, and black, no one can hear your screams at the hands of an unaccountable law enforcement that brutalizes and profiles with impunity. These scenes are the peak of the film’s drama, where lightning is truly captured in a bottle, and a then-vilified artform produces a song that remains transcendent today.

Disappointingly, Compton descends into familiar movie biopic tropes with its sense of humor dissipating completely. The white hot socio-political rage is replaced by pool parties featuring copious amounts of naked women, bling, booze, and blunts. Ice Cube leaves the group for a solo career after Heller tries to strong-arm him into a one-time payout for his past writing services. When Eazy finally becomes aware that Heller, who has always favored him above the others, has been ripping him off as well, the confrontation between the two is interminable, with lines of dialogue literally repeated verbatim several times (I thought I was having déjà vu, but it was just lazy editing).

One redeeming moment of Compton’s second half is its depiction of the war of words between Ice Cube and his former N.W.A. cohort, fought over a series of rap battle records. In one scene, Heller and the remaining members  sit in a room listening to a track of Cube calling out each member of the group by name, before unleashing his most vicious attacks on Heller, repeatedly referring to him as “the Jew who broke up my crew.” Heller reacts by threatening a libel suit against his former client, railing against his “ignorant anti-Semitism.” Eazy tries to calm Heller by reminding him that they started this battle and that no-holds-barred records like this are just part of the cost of doing business in the rap game.

Strangely ignoring the particularly vicious battling that Dre and Eazy engaged in over their solo records “Dre Day” and “Real Muthaphukkin G,” the last act of the movie focuses on Dr. Dre’s budding superstardom as a producer and impresario, as well as Eazy-E’s tragic death to AIDS at the age of 31. By this time, very little information is presented that isn’t already widely known to even general audiences, sapping the potential for drama that the earlier scenes enjoyed.

Perhaps that’s inevitable to a certain extent, but I do wish the tone of the film had maintained the consistency of its first half, when the journey of these young men’s musical discovery unfolded with a taut realism and the same sly humor that made so much of Straight Outta Compton so resonant in its time and so relevant today. 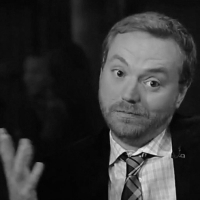 Anthony L. Fisher is a Writer/Producer for Reason.com. His work has appeared in The Daily Beast, The New York Observer, Filmmaker Magazine, The Huffington Post, and…